With the increase in the number of photographers choosing film over digital, large format film cameras are increasingly in demand. But can this look be recreated with a digital camera? Here’s how a photographer did it.

Large format film cameras have been around for years, dating back to the 1800s. Although they are considered to have old technology, I would say that the images they capture hold up to modern digital cameras. The large format film is known and admired for its insane detail. When an 8×10 film is scanned, it is possible to achieve flawless resolution over 700 megapixels. Of course, this provided you have a lens that can see so much detail. In addition, large format films have spectacular dynamic range and extremely shallow depth of field, allowing for interesting effects.

One of the disadvantages of running on such a format is its cost. Yes, you can buy a used large format camera for much less than a modern digital camera, however, you end up with a lot of expense every time you shoot. With the need for film inventory, development and digitization, the costs add up. In the digital world, the closest devices available are medium format cameras, such as the Hasselblad H6X. Unfortunately, not only does this model come at a steep price, it just isn’t quite comparable to the full-size.

I spoke with Alexey Shportun, a Ukrainian photographer, who discovered how to digitally recreate the large format look. And no, it’s not a Photoshop plugin. Alexey took it upon himself to build his own makeshift camera from scratch. However, it’s not as you might expect.

Alexey explained that his idea was to create a basic large format camera, but to replace the film shot with a matte white screen. So instead of exposing the light on a piece of 8×10 film, the light would pass through the lens and be projected onto the white screen, creating a visible image. Alexey was then able to photograph this projection through a small hole in the front, where he mounted a digital camera. 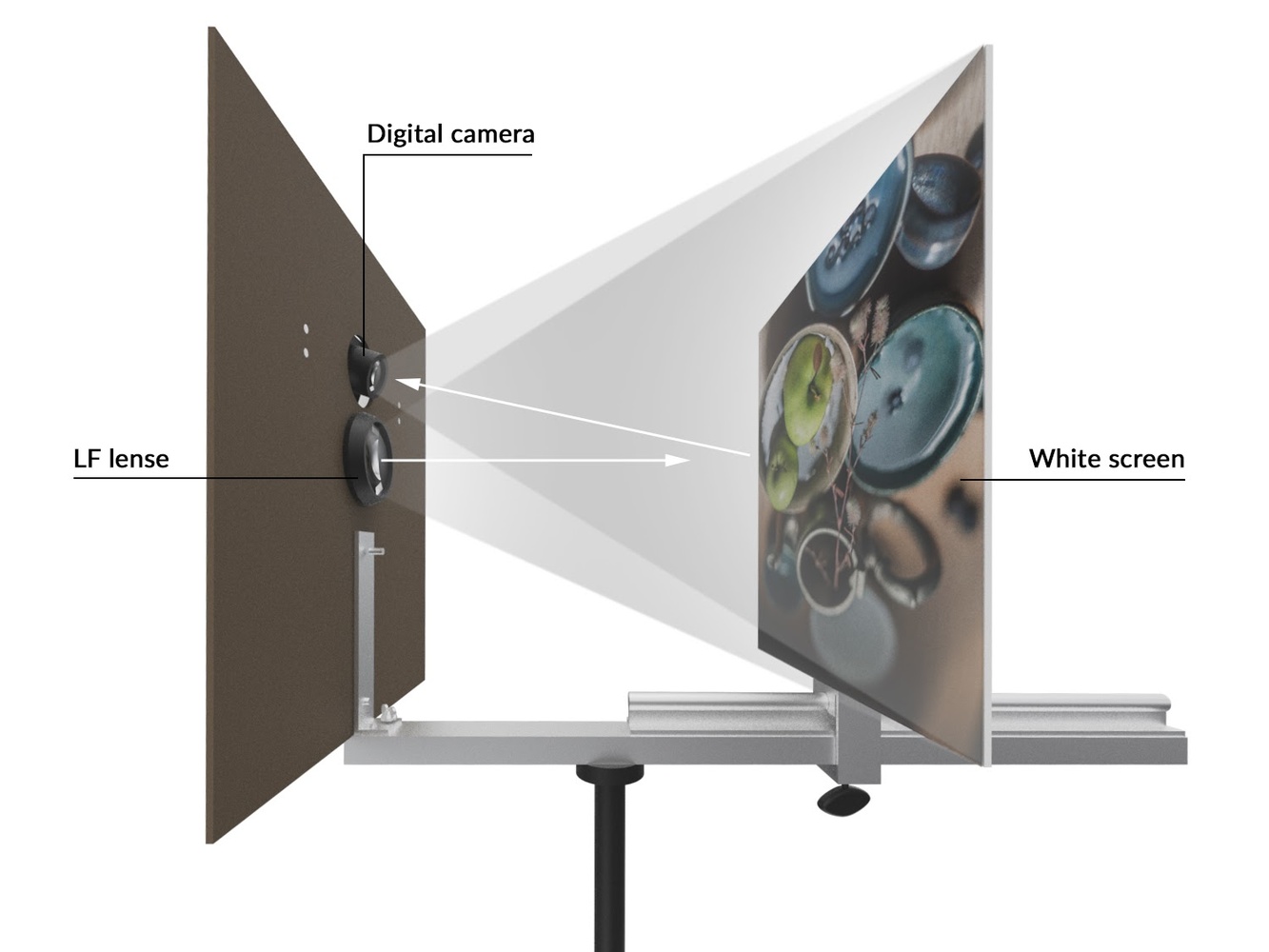 Of course, all this rig must be covered with a black sheet to protect the projection from outside light. Otherwise, you will get washed out images. Alexey noted that the lens’s image field was 40cm when in focus at infinity, and the distance between the back of the lens and the white screen was 30cm. Also, as you can see in the illustration above, the digital camera should be facing away from the scene.

This method essentially allows you to photograph digitally using a large format lens, but also to have the same field of view without cropping. Photographing this vast area gives you an incredibly shallow depth of field, as well as some interesting features. The images Alexey produced with this setup are stunning and I love the emotion that some of them have. You are, unfortunately, limited when it comes to color and dynamic range. Ultimately, those things boil down to your digital sensor and its ability to reproduce the colors and tones it sees.

When building the platform, Alexey decided to add a tilt feature to the white screen, allowing it to lean back or forward. This created a tilt and shift effect, making focusing interesting in an interesting way. Normally, this is only possible with specific lenses designed for offsets. 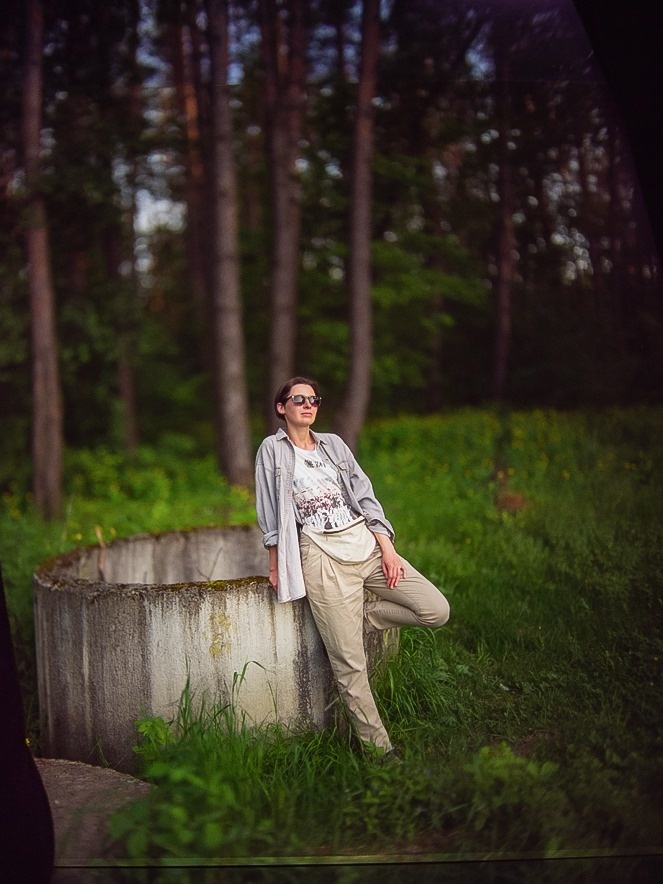 Alexey started experimenting with large format film photography in 2009, where he built his own plastic camera with an inexpensive modified lens. He told me how he used outdated black and white negative photo paper instead of real film. This made for a cheaper, but experimental alternative. A few years later, he came up with the idea of ​​using frosted glass and white screens to photograph. Through some trial and error, he captured some unique images.

I liked the idea, but spent a lot of time trying to combat graininess and vignetting. I have experimented with various frosted films, Fresnel lenses, I even made vibrating frosted glass. In the end, I obtained the result that satisfied me by photographing a 20x30cm polymer film with a Fresnel lens.

Alexey said the materials were largely purchased from a local construction store. Some even found it in his garbage. However, due to the DIY nature of the build, he explained how this had a significant impact on the look and feel of the camera.

Alexey explained how he found the rig to be rather difficult to build, due to his inexperience with using handyman tools. Building a camera from scratch is certainly not an easy task. Additionally, Alexey struggled to purchase all the materials needed within budget. As he was doing this experience as a hobby, he didn’t want to dig too deep into the family budget.

The main challenge in shooting is the complex, multi-step process required to frame a shot. Alexey told me that he had to focus on the white screen with the digital camera first. Then to frame the image using the platform, making frequent adjustments to both cameras and lenses. It is certainly a slow process, and not a method designed for quick shots. In terms of design, the platform itself is very bulky and not exactly the most travel friendly.

At the moment my task is to make such a camera design so that anyone can create it for themselves.

Finally, Alexey detailed his discomfort with taking an image while being away from the stage. He said it was an unusual idea not to stand behind the camera. I can imagine how it would go against the natural desires of a professional photographer to do so. 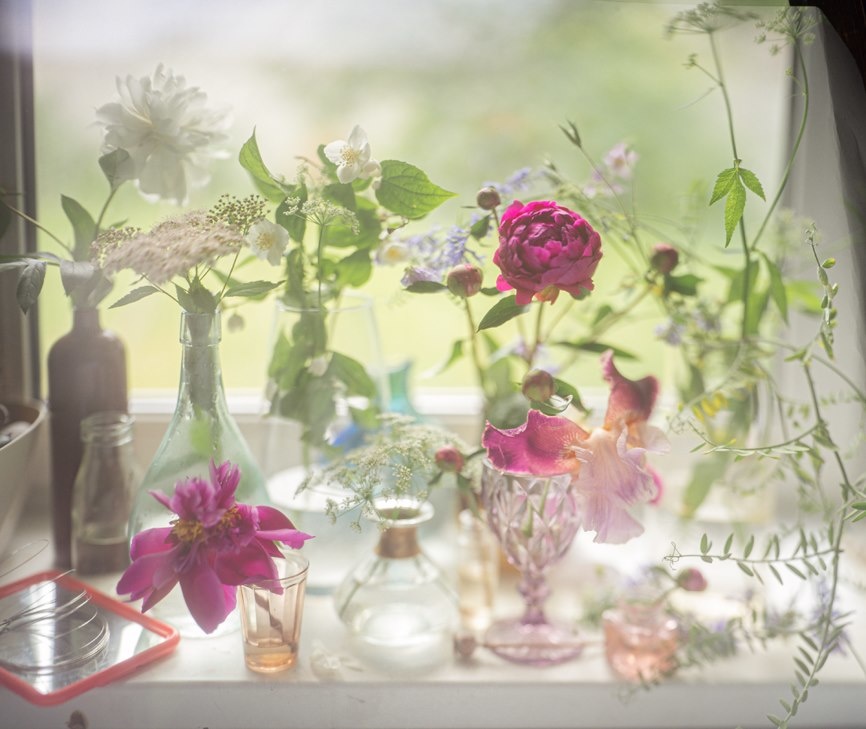 Many people are drawn to the appearance of large format films, but many are put off by their high cost. Not to mention the photochemistry involved in developing the image, which is bad for the environment. Perhaps this unique crossbreeding technique could be a stepping stone towards creating a large digital format.

Maybe one day we can see the classic large format camera with a touchscreen instead of frosted glass. And at an affordable price.